SSR Does Not Operate Normally under a Small Load Current

In this article, we will answer customers' inquiries about load current in a solid-state relay (SSR), which is a contactless relay. As well as, mention some points to heed in circuit designing. If you are planning to use or are already using an SSR, this article will help eliminate your concerns and find solutions to your problems.

We have an SSR circuit in which the load carries a little current and is connected to an SSR. In this circuit, the load does not turn off when the primary side element turns off. Why does this happen?

We have an SSR circuit which has a built-in snubber circuit. In this circuit, the load turns on in some cases despite the input side element having turned off. What is the cause of this behavior?

When the SSR is off, voltage is divided between the SSR and the load at a voltage-division ratio matching a ratio between the impedance (which is AC resistance) of the snubber circuit, which is a series circuit composed of a capacitor and a resistor and the impedance of the load. So, if the load is a minute one and thereby having a large impedance, turning off the SSR leaves a large voltage remaining at the load. This may lead to a reset failure (see Fig. 2). 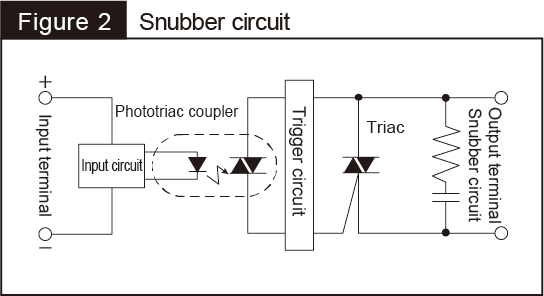 You should note, however, that such a case does not necessarily mean your SSR is defective. Sometimes the SSR behaves as if it has a problem with resetting because of impedance differences and load types. You can handle this problem by connecting a dummy resistor in parallel to the load. This reduces the voltage remaining at the load, thus allowing you to avoid a resetting failure (see Fig. 1).