In reply to customer questions, this article describes toggle switches ranging from the basics to contact types and designations. Please make use of this information and expand your knowledge of toggle switches.

First, let's examine the basics of toggle switches. Toggle switches are generic switches that are turned ON and OFF by moving their levers. For example, to help you understand, imagine a scene from an old science fiction movie in which a robot or ship is being operated with switches, etc., whose levers were moved up and down with a snapping sound.

Next, let's have a look at the designations of generally used contact types and of the contact types used for our toggle switches.
As shown in Figure 1, the designations of Panasonic toggle switches are specified using the combination of the "number of poles and operating characteristics." Use examples include "single pole, single throw," "single pole, double throw," "double pole, single throw," and "double pole, double throw." In addition, the designations of ON-ON and ON-OFF, etc. are used for indicating the operating characteristics. This type of information can be assessed through figures representing model numbers. 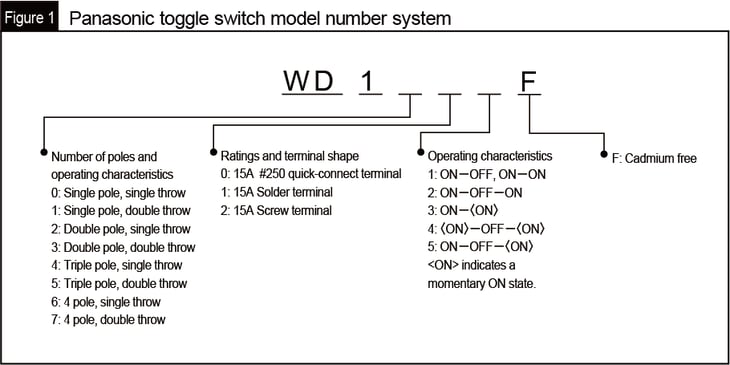 First, the following descriptions explain the differences between the terms single throw and double throw of "the number of poles and operating characteristics."

In general, the following contact methods are used for switches. 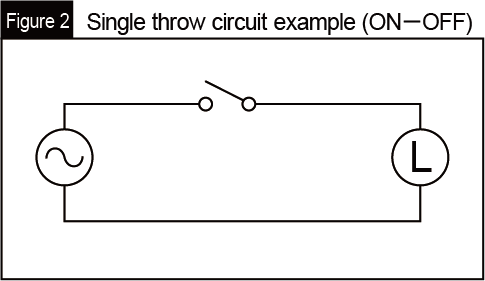 On the other hand, the designations "ON-ON" and double throw correspond to the same contact circuit structure, which is used for switching circuit loads as shown in Figure 3. This structure allows the adjustment of brightness or a machine's driving force. For example, to help you understand, imagine lighting where L2 normally lights up, and is turned OFF before L1 is turned on by toggling the lighting switch. 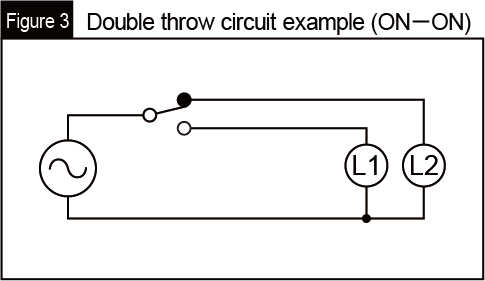 To build a circuit used when stairwell lighting is switched on and off by two switches, one upstairs and one downstairs, a three-way switch structure is used as shown in Figure 4. Form C contacts are applied to this circuit, achieving a structure that allows either switch to turn the lights ON-OFF.

Figure 5 shows ON-OFF-ON type Form C contacts (double throw). Since the lever of this toggle switch can be stopped at the middle position, both circuits L1 and L2 can be turned OFF. This double throw circuit is used when switching between high-output, low-output, and off states is necessary for ventilation fans and electric fans, for example. 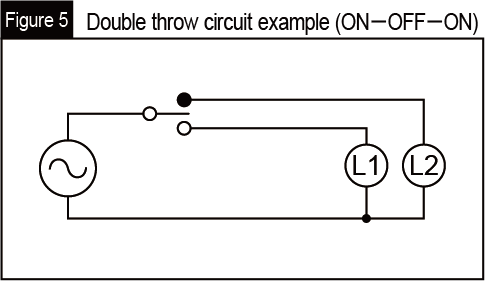 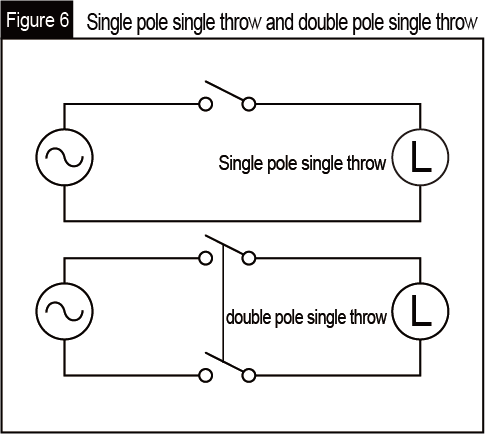 For your information, a contact type consisting of double pole and Form C contacts refers to a double pole double throw structure. When switching multiple circuits simultaneously by the single toggling of a switch, this type of multiple-pole switch is used.

How did you go with the explanations above? This course explained toggle switch circuits, including their basic points and variants.

At first glance, the operation of toggle switches seems monotonous; however, there are also switches that actually allow multiple types of control internally. Please make use of the above information when designing circuits, including the principle of toggle switch operations.

Keyword in this article