Differences between Momentary and Alternate Switches

There are two types of operation methods for operation switches (a push type switch is described this time), namely, momentary and alternate methods. Now, the following descriptions explain each operation method.

First, let's explain the momentary operation.
As shown in Figure 1, the momentary operation method keeps the ON state of a switch only when its button is pressed and held, and the switch returns to its OFF state when the button is released, which is also referred to as a self-reset type. It is indicated as "Momentary type" in English, where "Momentary" means lasting for a moment. 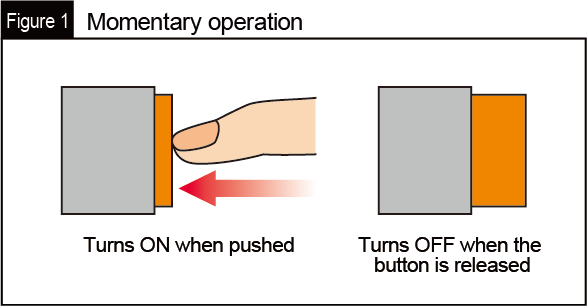 As a use example of this momentary operation type switch that may be familiar to you and easy to understand, let's examine the crane game machines used in amusement facilities. A momentary switch is used for the machine's button to move and position the crane.
Such momentary type switches are used for other applications, including buzzers for disembarking from a bus, wherein such switches are used to construct buzzer buttons that only require one push for a one-time operation.

Next, the alternate operation method is illustrated in Figure 2. A switch of this type turns ON when its button is pressed once, and maintains its ON state even after the button is released. This operation method is referred to as the self holding type. It is indicated as "Alternate type" in English, where "Alternate" means "by turns." 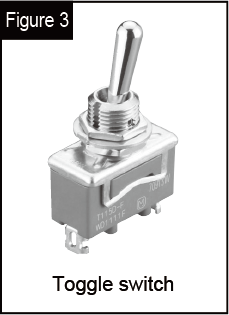 The main power switch used for TVs and stereos and the push-button power switch for flashlights are familiar use examples of switches of this alternate operation type. This alternate method is frequently used for applications that use the same button to control the ON and OFF state of equipment.

The toggle switch in Figure 3, which was previously mentioned, is explained a bit further below.
A toggle switch is used to switch equipment when its knob is pushed down, in a similar fashion to a lever operation. Panasonic provides both alternate and momentary type toggle switches, which were previously explained.

Panasonic refers to toggle switches using the momentary method as the "recoil" type. The lever of such a switch maintains its pushed down state while it is pressed and held, and returns to its upright position by the force of the switch's internal spring when the lever is released. Therefore, they are indicated as the "recoil" type.

Table 1 summarizes the operation methods used for toggle switches. The <ON> description in the table indicates the switch's ON state while its lever is in a momentary operation position. 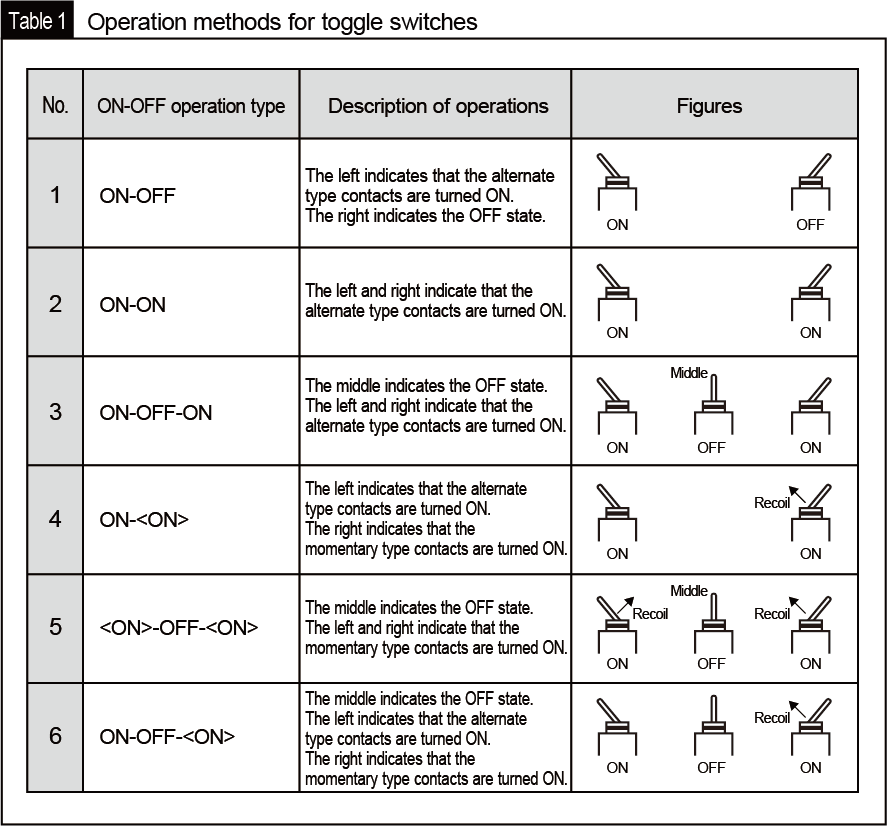 Since the operations of switches No. 5 and No. 6 are slightly complicated, they are explained here.
Switch No. 5 is turned ON when its lever is pushed down to either the left or right and turned OFF when the lever is in the upright position (middle in the figure). The left and right in the figure show that the switch is turned ON based on the momentary operation method whereby the lever returns to its upright position when released.

Switch No. 6 is turned ON when its lever is pushed down to either the left or right, which is the same as switch No. 5. Only the difference is that one pair of contacts operate according to the momentary operation method, while the other pair of contacts operate according to the alternate operation method. You can imagine a food processor button as an example of the use of such a switch. The switch can control such product by allowing its rotation while its button is pressed and held, or continue its rotation even if the button is released after it is pressed once.

Keyword in this article